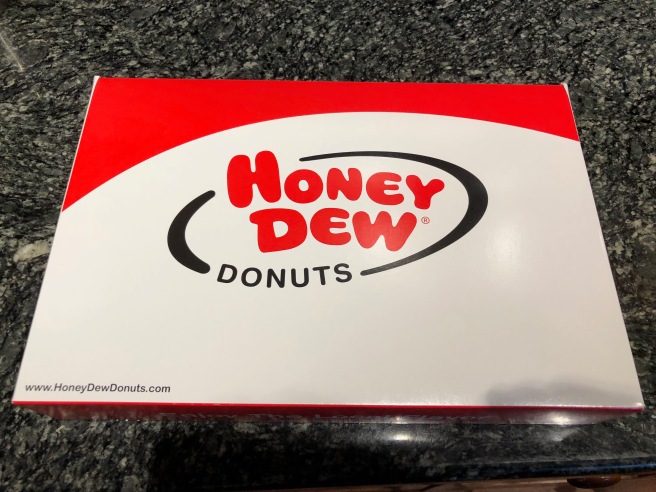 OK, I know my motto is “Anything worth eating is worth learning to cook,” but when it comes to donuts, I actually do leave that to the experts.

There was a time about six years ago when I had a serious donut addiction, which all started one night when my friend Deb and I were on our way home from a very late Red Sox game.  My husband picked us up at the MBTA station in Braintree, MA, where the aroma of freshly baking donuts was emanating from a Dunkin Donuts nearby.  There was also a time when Dunkin was open 24/7, but by that time they were already closing around 10-11pm.

Driven wild by the sweet smell, we searched for any donut shop on the 12 mile drive home that might still be keeping late hours, but alas they were all closed.  Deb and I made my husband promise us donuts for breakfast the next morning, which he gladly provided from a Dunkin Donuts in our home town – where there are no fewer than three.

The next few months were a marathon of donut consumption, where I had to have one every evening after dinner, every morning with my coffee.  It finally came to an end when I was compelled, on a torentially rainy night, to venture out at 10pm for donuts that might still be fresh, only to see the last palatable few go to the one customer ahead of me in line.  It was a sad wake-up call as I left with two dry crullers.

I went cold turkey and soon lost the five pounds of donut weight around my muffin top.

Flash forward to yesterday when I watched the episode of The Great British Baking Show, where the challenge was to bake ‘jam-filled donuts.’  Oh no!  My mother’s favorite.  The jelly donuts she insisted I include in her weekly shopping order every Sunday once I became her caregiver.  The craving was instant and persistent, augmented by the notalgia for my mother’s favorite sweet.  I called my husband and asked him to stop at Dunkin for a few jelly donuts, and explained why.  He accepted the mission, saying he’d also get some lemon-filled for himself.

He came home with a rumpled little bag containing four of the saddest excuses for jelly donuts I’ve seen since the #7 contestant’s failed effort on GBBS.  Small, flat, sugar coating melted into the dough, and maybe a scant teaspoon of jelly filling inside.  We concurred, the worst we’d ever had.  Even the supermarket provides a better product.

This morning I was on a mission to satisfy that hunger, and researched Yelp reviews for other non-Dunkin shops in the area.  Aha – rave reviews for Honeydew Donuts in Rockland, just a few miles down the road, in a location formerly occupied by Viola’s Donut Shop in the ’80’s.  Viola’s, I recalled,  were so big that only six could fit in a dozen-sized box.

Success!  I am now the proud hoarder of six magnficently plump filled donuts weighing a total of 33 ounces in their box.   That’s about 5.5 ounces of donut heaven apiece.  Look at these beauties!  From left to right – lemon-filled, jelly, and apple.

Now look at how one of these jelly beauties stacks up next to the pitiful thing from DD. 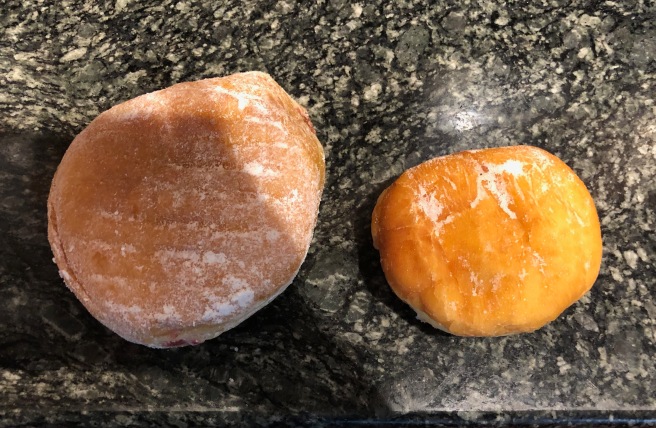 Need I say more?  Yes – if you love donuts and are still getting yours from Dunkin, you don’t know what you’ve been missing.

One thought on “In Praise of the Well-Made Donut”