So it’s Superbowl Sunday, and kick-off is allegedly in 8 minutes as I write this sentence.  Of course there will be the over-the-top rendition of the national anthem (of which very few Americans even comprehend the words), the extended introduction of the players, the sponsored coin toss, and eventually, a cavalcade of highly-produced commercials interrupted by a football game.

Forgive me for not being interested, or for not having a spread of nachos, chicken wings, pizza and beer laid out.  My son and his GF are off to a party with their friends, and we two are looking forward to our usual Sunday night supper of comfort food and favorite shows on PBS, HBO and Showtime.

Tonight it’s an old favorite I first discovered as a recipe from Call Cuisine, a catering company, published as Veal Stew Maroc in Gourmet in the ’80s.  I have since tweaked this many times to its current version which I just rated as the best ever.  Served over a bed of egg noodles lightly tossed with butter and parsley, this needs just a green salad or green vegetable to make the meal complete and colorful.  I’ve often served this as one of our dishes on Passover, since it’s so good when made ahead – as all stews do, it just improves with flavor after a night spent in the fridge.  But I can’t wait – we’re having this in about an hour (some time during the first quarter, I expect): 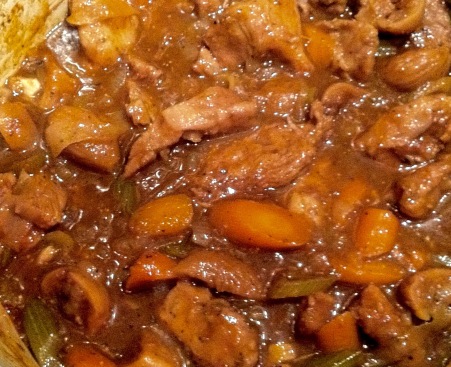 3 celery stalks sliced thinly on the diagonal, or the equivalent amount of thinly sliced fennel & celery

Preheat oven to 375.  Combine first six ingredients in food processor or blender.  Heat 1/4 cup olive oil in a 5-quart Dutch oven over medium heat.  Dredge the seasoned veal in flour, shaking off excess, and brown in batches.  Remove veal to a plate as pieces are browned.  Add the onion, shallot, carrots and celery/fennel to pot and sauté until softened and slightly browned.  Deglaze the pan with 1/4 cup of the broth, scraping up the browned bits.  Add the Madeira mixture, remaining broth, veal and figs to the pot and bring to a simmer.  Bake for 1-1/4 hours until veal is quite tender.  Then remove solids to a bowl with a large slotted spoon and reduce the sauce over medium high heat until thickened and glossy – this is always the key to success with a stew…the concentrated flavors need no flour or cornstarch to thicken.  Return everything to the pot and serve over egg noodles or let cool and refrigerate overnight.