These pork kabobs are so filled with the flavors of Greece, if you closed your eyes you’d think you were dining on lamb.  I first found this recipe in the Aug/Sept 2010 issue of Saveur, and have made it dozens of times since.  The recipe calls for boneless country pork ribs – very juicy and tender, as is always the case with meat that’s been next to the bone.  I’ve tried it a few times with boneless pork tenderloin and it’s not as good – too dry, for one, and I hate having to deal with that silverskin on the outside.

Our pork is cut up and marinating for dinner tonight, to serve with our favorite Greek salad and some crunchy garlic bread made with an Iggy’s French baguette: 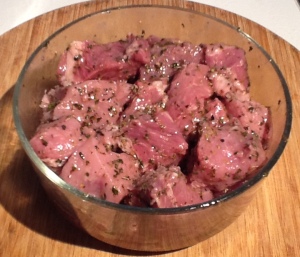 In a medium bowl as shown in photo, combine the marinade ingredients: 1/4 cup each extra virgin olive oil and dry red wine; 2 T fresh lemon juice; 1 T each dried oregano and mint; 2 very large crushed garlic cloves; one crumbled bay leaf.  For four people, use 2 lbs. boneless country ribs trimmed of any obvious chunks of fat and cut into 1-1/2″ cubes (we always tell the butcher at WF to choose the least fatty pieces).  You should have about 24 cubes.

Marinate for at least an hour, or as long as all day. Skewer six pieces on each of four skewers, either with or without peppers and onions between the pieces.  Then season all over with salt & pepper.

Grill on high heat until cooked through and slightly charred, about 8-9 minutes.